Assuming the phone can only boot till MIUI logo then it restarts, this means the phone is already hard bricked. You have no choice but to reload the fastboot firmware. I’ve read through many tutorials and found them not useful. Through trial and error, I managed to figure out the specific steps to recover a bricked Redmi 1W.

You need to know this information: Redmi 1W uses the MediaTek 6589T chip.

Step 2: Unrar the MIUI Recovery Rom file, we need one file called the scatter textfile. The scatter text file lists all the addresses of peripherals of the phone.

Step3: Extract and execute SP Flash Tool version 5.1724 or earlier as the newer versions will not accept the scatter file. You need to indicate the location of the MIUI rom and the scatter file in the SP Flash Tool application. Select “Format all + Download”. Press the Download button on the top and proceed to the next step.

Step4: Remove battery from the bricked phone for 5 seconds, then replace it. Connect the USB cable to the phone’s USB port and to the laptop. Press down on the Volume – button and hold. The SP Flash Tool will start to recognise the phone and proceed with format and download of the fastboot recovery.

Step5. After sometime, the phone will automatically reboot and the MIUI rom will reappear.

If you have old plastics which had yellowed with time, have no fear! (and don’t throw away good plastic enclosures!).

All you have to do, is to place the plastic enclosure under bright sunlight for couple hours a day. Repeat until the yellow fades back to its original colour!

Managed to get Linux dual booting on an old but high spec’ed MacBook Pro using rEFInd. This was the second time I had Linux on the same machine and i’m still puzzled why the laptop runs cool to touch in macOS but quite warm in Linux.

I had disabled the discrete AMD Radeon GPU which caused display problems in macOS, via nvram.

I’ve also reloaded AMDRadeonX3000.kext on login via the following:

But this was not the same for Linux…

I decided something needs to be done to bring up the internal fan speed – looking around found tlp.

tlp stands for TLP (duh!) and can be found in many distribution’s repositories. I used this to change the radeon power profile and dpm states by changing the states from default to low.

Followed by restarting tlp with

After some googling, I loaded macfanctld.

Right off the bat, sensors started to show the correct fan speed. By pushing additional load (multiple Youtube and Vimeo channels) on the laptop, I can hear the fans working harder and sensors is showing higher internal fan speed.

But this still hadn’t brought the temperature of the MacBook Pro to macOS level of temperature. I’ll continue to update this once i find out why and how.

I received a Gillette ProGlide which stopped functioning after couple years. Recently it resurfaced after a house clean-up. It had a leaking AAA battery which was removed and disposed off. With the gunky remainder, I squeezed out juice, from a lemon hiding in the fridge, onto a cotton bud then rigorously swabbed until the innards were clean.

It still didn’t power up. 🙁

Pulled out the entire metal assembly to find the following:

The blue pushdown switch in the centre of the PCB is the on-off switch. Sticking in a fresh AAA battery, the motor on top, spun continuously until the switch was depressed again.

Reassembling was pretty easy. The ProGlide did not require the two metal clips to be put back into place, as the bulbous end cover held the entire assembly tight. I just made sure the motor and switch assembly could slide into the housing. Rather effortless.

Then tested the razor assembly one last time by pressing the blue switch before covering the hole with the silicone button.

I am running 10.14.3 on an unsupported Apple hardware. macOS 10.14.4 update showed up on the App Store Updates for quite a while now. I had the opportunity to update to 10.14.4 rather early this morning before skipping out for training. Popped by the mac couple times and before realising the mac hung after a reboot.

I relied on dosdude1’s Mojave Patcher as this mac hardware was no longer supported by Apple. I somehow skipped checking his page for the latest news on 10.14.4, and this turned around and hit me squarely in the face.

Drats! Training called and I had to leave. I was mulling over this problem and googling to no help – It is very no one tried updating to 10.14.4 WITHOUT dosdude1’s 1.30 patch.

Just not long ago, I bit the bullet and applied the 1.30 patch over the currently non-functioning partition. After 32 minutes and applying the dosdude1’s Post Install drivers, the mac booted up. [Hooray!]

I was trying to setup a test lab and had to run one of the devices off a 12V 0.5A wall wart. Picked one up and jiggled it a bit to hear a knocking sound. Out of curiosity I opened up the wall wart to find this… 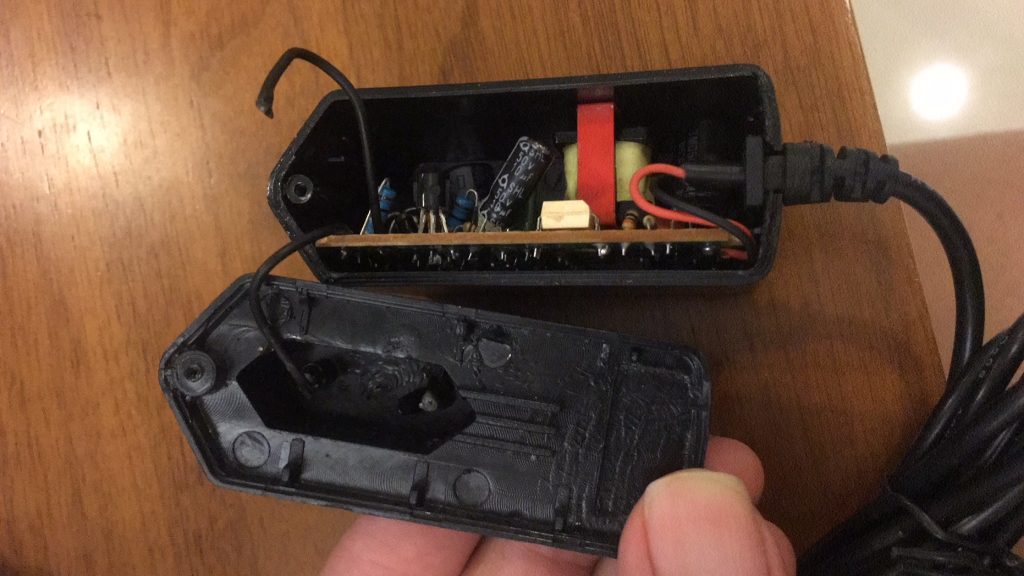 Updating this blog after a busy weekend. I came into possession of a Lenovo Yoga 2 Pro ultralight which could not boot up. The BIOS showed the stock 256 GB SSD was not recognized – uh oh not a good sign.

Quickly went to Sim Lim to pick up a replacement (and one with a larger space) mSata SSD – Samsung  850 EVO 500 GB and prepared for the operation.

Something at the back of my head was stopping me from replacing the SSD, so I thought to give another spin on the repair bandwagon. After some mucking around, I managed to resuscitate the Y2P, not after downloading a Windows 8.1 ISO (its free to download but you will need to key in a serial number if you are doing a bare metal install) from Microsoft.

The magic is found within the Repair Options -> Command Line in the Windows 8.1 thumbdrive.

The Y2P started to boot up normally. I was able to log into the Windows 8.1 desktop.